Christopher Nielsen’s illustrations have been used by zoo’s, airlines, department stores, and fishmongers around the globe

but his real passion lies in illustrating picture books for children. His immediately recognisable artwork can be seen in numerous

accompanying stories and poems in The School Magazine each month.

His work has been acknowledged by The AGDA Awards, 3×3, Communication Arts, American Illustration, Society Of Illustrators NY,

Luerzers Archive, Hotshop Awards and The Creative Annual. He has received Gold, Silver and Bronze medals in the Illustrators Australia

Awards and in 2018 he was shortlisted for the CBCA Crichton Award for Best New Illustrator in Children’s Book Illustration.

When he’s not illustrating children’s books or raising a young family he can be found on stage playing guitar with his band The Ramalamas.

His next picture book, Jelly-Boy written by Nicole Goodwin will hit the shelves in early 2020! 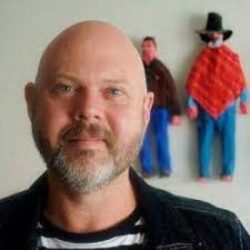