Skip to content
Phil Lesnie is a Sydney-based illustrator of books for children. He works primarily in watercolour, because in a watercolour painting even mistakes look lovely, and he makes them to this day.

His debut book, “Once a Shepherd” by Glenda Millard, was shortlisted for the Speech Pathology Australia Book of the Year and featured on the United States Board on Books for Young People Outstanding International Books list.

He is also the illustrator of “Feathers” by Phil Cummings, which was shortlisted for the Prime Minister’s Literary Awards in 2018.

Most recently, he illustrated “Miss Franklin” by Libby Hathorn. It doesn’t have any stickies yet but it’s pretty rad.

He has given talks about his creative process, run watercolour painting workshops and performed live painting demonstrations at the Sydney Writers Festival, The Sydney Children’s Festival, Newtown Festival, The State Library of NSW, and at schools and bookshops across NSW 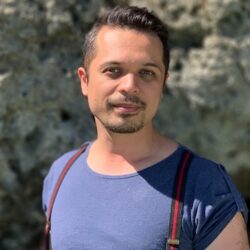