Mick Elliott is an author, illustrator, TV producer, literacy ambassador and mischief-maker who has been doodling and telling stories since he was a toddler.

His hilarious adventure trilogy, THE TURNERS, was nominated for an Aurealis Award and features on the Premiers’ Reading Challenge. The series is extremely popular with upper primary aged boys and reluctant readers. It playfully explores themes of family dysfunction and the challenges of teenage life.

His illustrated comedy series, SQUIDGE DIBLEY DESTROYS THE SCHOOL, features a class of outcasts who band together to defeat the tyrannical schemes of their child-loathing vice principal. An instant hit with middle-primary aged readers, the series has been sold into six international territories to date.

Mick has an award-winning career as a children’s TV producer and screenwriter, working on on acclaimed productions for Nickelodeon, the Sesame Workshop and the ABC.

His dynamic and interactive presentations and creative workshops are always a hit with kids at schools and festivals.

Mick lives in Sydney with his wife, two kids and a garden full of lizards. 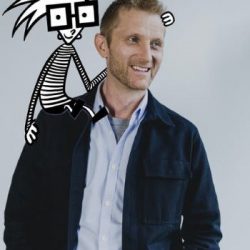