Skip to content
J.C. Burke was born in Sydney in 1965, the fourth of five sisters. With writers for parents, she grew up in a world of noise, drama and books, but decided to become an Oncology nurse after her mother lost a long battle with cancer. Burke says nursing probably made her a better writer.

The Story of Tom Brennan won the 2006 CBC Book of the Year – Older Readers and the 2006 Australian Family Therapists Award for Children’s Literature. It was on the NSW HSC syllabus list until 2018. Pig Boy won Burke the prestigious Ned Kelly Award for crime fiction in 2012.

Burke started writing in 1999 and has published a number of acclaimed books for teenagers and young adults. She’s currently writing her first adult novel after a 6 month break travelling through South America. 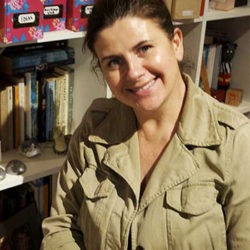