Nat Amoore is a writer who is passionate about encouraging kids to read, write and explore their imagination without boundaries. With a background in writing for screen, she wrote and directed international award-winning short film Elemenopee and has a feature film screenplay and a kids’ TV series in development. Nat was a recipient of the CBCA Maurice Saxby Creative Development Program for 2018. In February 2018, Nat (along with fellow hosts Kate and Liz) launched kidlit podcast One More Page (onemorepagepodcast.com), which was a finalist in the ‘Best Newcomer’ category for the 2018 Australian Podcast Awards. The podcast has featured in publications such as Books+Publishing, Buzz Words and the SCBWI AUS&NZ newsletters.

Mike Barry is a writer and illustrator from Sydney’s Northern Beaches.

He created, crowd-funded and self-published the first two books in his middle-grade graphic novel series, Action Tank, which have been shortlisted for multiple literary awards including the NSW Premier’s Literary Awards, Russell Prize for Humour Writing for Young People, Aurealis Awards and Comic Arts Awards of Australia.

In 2022 Mike joined forces with bestselling author Nat Amoore to illustrate We Run Tomorrow, a story about four kids – and four superheroes – who are taking their future into their own hands. 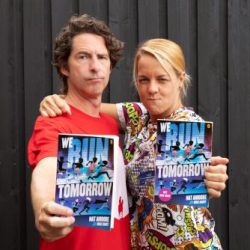